Developments in financial data, cryptocurrencies, tech and communication has allowed money to move anywhere in the world with speed and ease. This makes money laundering an increasing, pressing global issue. The deeper "dirty money" gets into the financial system, the more difficult it is to identify and trace its origin.

The nature of money-laundering makes it difficult to estimate the total amount of money that goes through the "laundry cycle" on a global scale. However, according to the U.N., the amount of money laundered globally in one year is estimated to a 2 - 5% of global GDP, or $800 billion - $2 trillion in current US dollars. Though the margin between those figures is huge, even the lower estimate underlines the seriousness of the problem.

How does it work?

Money laundering is conducted in multiple ways, with skills and innovation of criminals increasing rapidly. However, at a basic level the process of laundering is described in the following steps by the FATF (Financial Action Task Force);

The FATF argues that while virtual assets and related services can spur financial innovation and efficiency, their distinct features also create new opportunities for money launderers, terrorist financiers, and other criminals to launder their proceeds or finance their illicit activities.

The ability to transact across borders rapidly not only allows criminals to acquire, move, and store assets digitally often outside the regulated financial system, but also to eclipse or hide the origin or destination of the funds and make it harder for reporting entities to identify suspicious activity in a timely manner. These factors add hurdles to the detection and investigation of criminal activity by national authorities.

What is a virtual asset?

The term "virtual asset" refers to any digital representation of value that can be digitally traded, transferred or used for payment. Examples are cryptocurrencies, such as bitcoin. 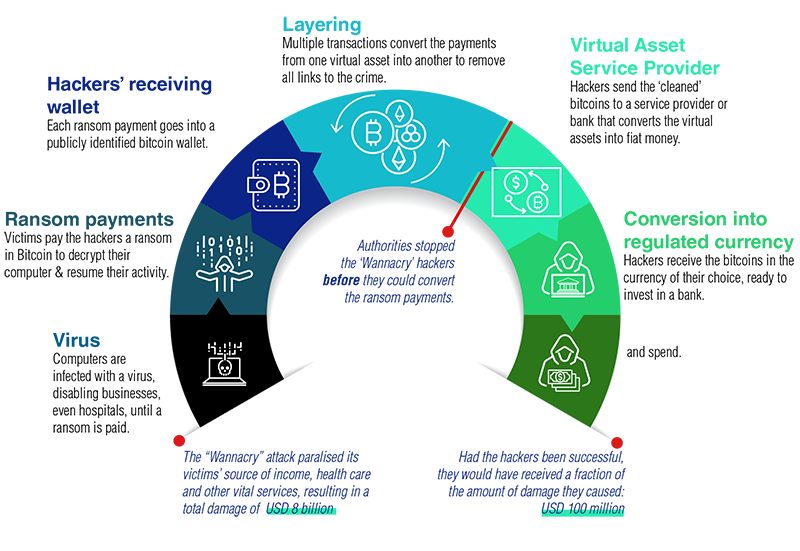 "Example of misuse of virtual assets in cyber attack"

New, innovative ways of swiftly transferring value around the world has the potential to radically change the financial landscape. However, its speed, global reach and above all - anonymity - also attract those who want to avoid financial audits and inspections by authorities' . Virtual assets have become widely available in the last decade or so, now also being used as payment products. However, without established regulation and oversight, the sector is often still referred to as the "wild west" of the finance industry.

In 2017 the "Wannacry" ransomware attack held thousands of computer systems hostage until the victims paid hackers a ransom in bitcoin. This is just one of the ways virtual assets are being used in money laundering activities, illustrated in the image to the left.

The FATF recently released a report with a list of red flag indicators, in relation to virtual assets and money laundering. We've listed a few examples of red flags from the report here;

Any suspected activity in regards to money laundering or financing of terrorism should be reported to authorities. The examples above are just a few taken from the report. Read the full report from the FATF here!

Posted on June 29, 2021Customer data
Here are some of the latest news, features and releases from our…

Posted on May 31, 2021June 2, 2021AML
Lina Sandmark, lawyer at Kompass Advokat and specialist in financial regulation, answers…
All News